How lucky I am to be able to introduce John Foggin as my current ‘featured poet’. John has a real work ethic when it comes to poetry, having published a number of excellent pamphlets over the last few years. He also has an amazing capacity to win prestigious competitions. So, it will come as no surprise to learn that a full length collection is in the pipeline for later this year. He also finds time to write a highly informative and entertaining blog, The Great Fogginzo’s Cobweb.
In terms of the information below, John has done all the work, so I can take very little credit for this post! 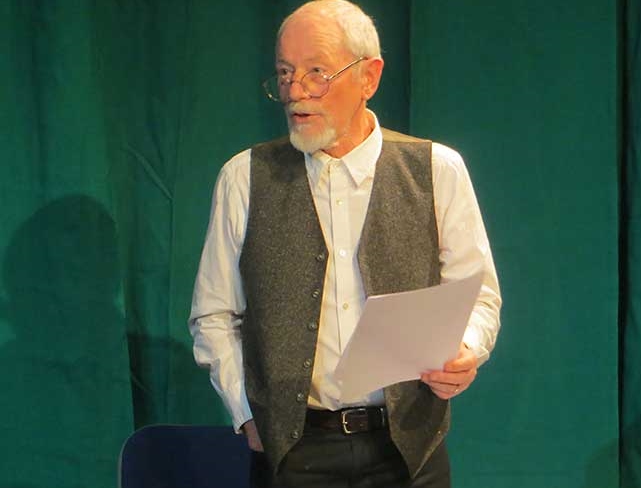 John Foggin. I grew up in the Heavy Woollen District of the West Riding. Nearly all my relatives were Methodists who worked in the textile trades…my dad was a woollen spinner. Our house was a two-up-and-one-down back-to-back. Respectable, self-improving working class. We never had a phone or a car, but we went on holidays to Cornwall when the pals I played out with went to Brid or Blackpool. I passed my 11+ at the age of 10, went to the local Grammar School, could have gone to Art School, but, luckily, went to University in Durham instead, did English, and then trained as a teacher. I can’t remember ever wanting to be anything else

Poets and poems
As a teenager it was the Metaphysicals and their smart poems of seduction. They were seriously hip, louche and sardonic. 20th Century poets include:

Tony Harrison, particularly, Them and Uz, and National Trust…the latter is one of the few poems I know off by heart, and has my favourite line:

“ the tongueless man gets his land took”

Seamus Heaney..especially Tollund man for its textures and humanity

Norman MacCaig. For his apparently effortless craft and erudition and wit.

Of contemporary poets I like Christy Ducker especially, and Steve Ely is currently disturbing my dreams. And I really enjoy to be in the same virtual room as so many young ones…Kim Moore I love listening to. Too many to pick out favourites. Apart from Kim.

You look at me
and I know
what you think
you think that I know
where the dead are buried.
and I tell you what
I dream
I dream of cottongrass
its million white heads
its tender flowers
streaming white
like the blood of Jesus
like the love and mercy of Jesus
white as forgiveness
white as the rainy wind
and there are no bodies
if there ever were
they are gone in the whin
in the bracken
ground small
between millstones
and you think I know
where the bodies are buried
but I know I can look
in this mirror of steel
and I do not know for a second
the woman who stares back at me

A rare punishment for a cunning woman,
a weaver of tales and tapestries, and one
who may, one day, have idly wished
she had an extra pair of hands. I know
the gods lack sense and empathy.

A spider is a nasty thing, Athena says,
A hole and corner scuttler.
Arachne, cunning woman,
weaver of talesand tapestries…
she’ll learn who spins the best.

So, here we are, our endless
spooling silks as fine as thoughts,
sending spinnerets to drift on the night,
to catch and catch, working the warp and weft
of webs to thread the dew and net the sun
and the flutters of small white moths,
and smother the flies’ blue buzz;
to bind up wounds, staunch blood, and heal.

With our eight hands we take
the measure of the world.

You have gone from slow. There was a shift in things
as though the air was panes of glass that slid and puzzled
and then there was the still
of nothing at all and weightlessness
listening to small stones scrape  on the steel of a spade.

You remember how cold,
and how the weight of the ground
sank around you, how it settled,
how you fit, like an egg, or an ammonite.

Months now you have leached and leached.
Hair lasts beyond flesh, beyond muscle.
There are things here
that go about their patient business
unpicking, worming through
appointed places. You settle for that.

It will take time, you understand,
to be perfect bone, fossil-neat,
curled and comfortable,
each vertebra exactly so.
There is only one way for a cat.