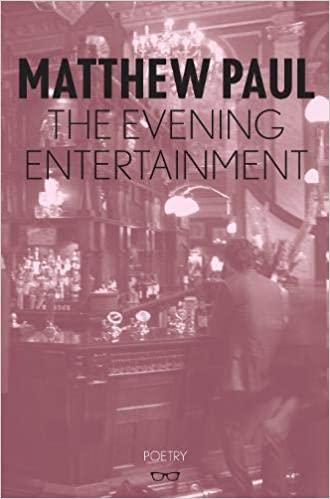 From the high wire walk of the opening poem, in which the speaker instinctively knows how to ‘balance upon the beautiful tautness/ stretching my mind’, the reader knows they are in safe hands. These are direct and highly accessible poems, well-crafted and often having a strong narrative drive.

The book is divided into three sections. Section One contains poems that span time, place and character, and give voice to unsung heroes, such as ‘The Boating Lake, where, ‘our man/ coxed for Leander in his youth so he steers/ an impeccable course through the tempest’. Think of all the correctness and stiff upper lip that ‘impeccable’ implies. Often, the characters in these poems are isolated: ‘sole’ customers. Paul uses precise and telling detail at a tangent to the subject of the poem. For example, the struggle between Jacob and the angel is told in a series of wrestling moves: ‘pile drivers, headbutts, a hangman hold, a splash; /nelsons both half and full, the kamikaze crash …’ It’s a mythic battle, where the opponent is built ‘like Apollo,’. However, this is also a Christian battle for the soul: at the end, ‘It was God’s turn to brawl’. The rhyming couplets here give a sense of pace and also hold some satisfying surprises, such as ‘gibbon/ submission’. There’s real pace and energy in these poems, but also a sense of humour (contrast Jacob with Mrs Peabody, the strongwoman who lifts a ‘baby-oiled heavyweight boxer’ above her head).

In between some fast-paced poems are quiet, contemplative gems such as ‘Scarlett’s Place’, where both the child’s music and her scribbled drawing resemble: ‘an unopened punnet/ of semi-furred strawberries/ flown in from California.’ The detail here hints at wider questions. The strawberries are starting to go off, even though they’re unopened. What does Scarlett’s future hold, in a world where strawberries are ‘flown in’ but not eaten, when ethics are put aside in order to satisfy our desire for out of season fruit?
In the sonnet ‘Stowaway’, the detail again makes us question the world we live in, a world where ‘a sim card in his boxers’ proves an asylum seeker’s identity, although this is only found after the man’s death. This poem’s denouement is terrifyingly bleak: ‘his grasp loosens from the landing gear … The council clear away the gore’. The rhyme is subtle and unobtrusive, the effect shocking. And the sonnet is just the right form, framing the incident, placing boundaries around it outside which we, as readers, will have our own conversations.

There’s some lovely natural observation in poems like ‘The Passing Winter’, where we see ‘a synchronised unkindness of dust-brown ravens’, or in ‘Rigmarole’ where ‘crows in westward flight at dusk/ crack the silence’. It comes as no surprise to find that Paul co-edited Wing Beats: British Birds in Haiku (there’s a lovely haibun later on, ‘Swallowtails’, which brings the adventure of a frenzied butterfly collector to a halt in the quiet, contemplative moment of the haiku).

These natural images are sometimes used with ingenuity, as in ‘The Stones at Redlands’. In the notes, we learn that the ‘Stones’ reference is The Rolling Stones. This is a poem about taking acid, but it’s also a spare, meditative poem where ‘sunlit milk pours/ endlessly, endlessly, into the pail …’ Does it need the ellipsis at the end? I’m not sure, but the effect of the repetition, the way it makes the line ring in your head long after the poem is finished, that’s wonderful. In fact, although it’s perhaps not typical of the collection as a whole, it’s a poem I’ve returned to many times. This may, of course, be to do with the fact that I’ve been having a go at writing very short, haiku-inspired poems myself recently, but I suspect that it’s just a really good poem. That use of the word ‘pail’ rather than bucket – with short poems, everything has to count and in this one it does.

Other images that stick in the head are the Friesian cow in ‘Down Creamery Lane’, with her ‘bathroom-light-cord tail’ (I love the touch of humour) and, at the end of Section One, the surfer, hair ‘tasselling down his wetsuit like the blades of dead men’s laces’.

Section Two groups together poems of childhood and adolescence. Again, it’s the precise descriptions that make you pay attention, a mongrel with ‘glue-coloured teeth’ encountered in ‘Columbia Park’, or the ‘shrieks of generations jumping the breakers’ on a family holiday at the Alum Sands Hotel, a holiday where ‘Longer than a week would be murder’.

Paul is a poet who tells it how it is, but how it is can differ depending on time and place. For example, see how ‘The Winter of Discontent’ contrasts with the earlier ease and luxury of ‘The Blue Coast Blues’; instead of a place where ‘The snow-capped massif parasols your features’, here we’re in a time of ‘Snow on the bins’, and ‘Co-op liver sausage and streaky bacon’. It’s home, with all its idiosyncratic routines, ‘Dad poaching herrings in milk’, ‘the pouring of PG Tips/ from a sage-green Beryl teapot,’ everyday detail that anchors us, memories that shore us up in times of change (how much more endurable that winter of discontent seems now, set against the backdrop of a global pandemic). As Paul accurately observes of those times, ‘We take it all for granted’.

Many of the poems in Section Two deal with a time of youth, free of adult responsibility. We see the poet growing up, then leaving home to go to university. In ‘Chalk’, there’s that awareness of being on the cusp of the adult world, the difficulties of being ‘so irritable, so typically thirteen’. In the poignant ‘Numanoid’, an elderly neighbour plays chess with the young Paul, yet although there is clearly a bond here, the reaction to his death is somewhat ambivalent, Paul ‘slouching sunwards’ while his brother listens to Gary Numan’s’s nihilistic lyrics: ‘And I die, you die.’ This is in contrast to the surreal daring of young men like Tim in ‘King for a Day’, full of ‘chutzpah’, finding himself ‘at the apex of a motorcycle formation team’ and driving down the High Road to a round of applause.
Many of these poems open with movement, drawing the reader in with a sparing depiction of action: ‘After necking/ a quick quartet of pints’ in ‘Pieta (‘quartet’ is such an interesting and evocative choice) or ‘Wangling a week’s work with Teal’s’ (Duckwalking in West Berlin). As well as the impetus of the openings, I loved the slightly oblique endings of poems like ‘Rasharkin’, where the ‘you’ of the poem drinks psychedelic tea then drives back ‘like Pacman reversing into twilight/ The rose moon rises in the harvest night’. It’s a fantastic couplet, but that last line could stand as a poem in its own right (a single line haiku).

Section Three is a slightly shorter section, focussing on the poet’s relationship with his father. ‘Vinyl’ details how the adolescent Paul played his ‘coloured-vinyl singles’ on the family’s ‘beechwood radiogram’, experimenting with the different speeds: ‘Seventy-eight; dirty/ psychotic, punked-up Pinky and Perky’. How different this sounds to his Dad’s James Last and Herb Alpert records. As teenagers, we aim to separate ourselves from our parents through our choice of clothes and music, and yet there’s still a need to feel connected to home, to belong.

Paul’s father is depicted as a man of routine, ‘inventorially’ locking the front door at night, wearing the bobble hat his wife has knitted him to keep his hair in place after washing it (in ‘Headgear). And despite his father’s ‘intrinsic dread at the thought of joining/ in’, he takes part, with his son, in a Mexican Wave at the Oval. Here, his father, ‘just for that moment/ resolves to live ad hoc; /we throw our arms right up to twelve o’clock.’ (Sunday at the Oval with Dad). Memory is particularly important in this section of the book, as it deals, in part, with dementia. In ‘The Sidecar’ Paul describes how his father fitted a sidecar to his motorbike, and how the recollection of this revs the bodily engine and makes ‘the lucent white of his memory run.’ Lucent is a beautiful word choice, positive and life-affirming.

There’s also an acute sense of the absurd, as when, in the care home, the poet turns his father’s watch back an hour. It’s an act of love for a man who has forgotten where he is: ‘By night, he gets half-dressed for going out: “To interrogate a Russian spy” ‘. Paul retains a sense of humour here that could so easily be lost. When we get to the prose poem ‘D Word’, we learn that, ‘Dad’s been disturbing other patients by yelling out’. Placed in a side room, he barks ‘Come on’. Paul carefully handles the possibilities of what this actually means: perhaps his father is calling to him and his brother, or the cat. But who could have imagined that final interpretation, that he’s calling to ‘death itself’. It’s a brave last line, short and powerful, stopping the reader in their tracks.
In the final poem, ‘Queen Queenie’, the ‘you’ is presumably Paul’s mother after his father’s death. Rather than seeing hope in nature, she hears it in the late blackberries, ‘still singing lustily on their bush’. Those singing blackberries are such an uplifting, life-affirming image and absolutely the right note to end on.

This is a very coherent collection. The blurb indicates that the poems have been written over a span of 30 years. I like that. It indicates a willingness to wait, to be attentive, to let the poems come to you. Perhaps this accounts for the variety of characters and situations Paul is able to relay, and the scope of the book. All in all, it’s a very satisfying read. I’m now looking forward to reading more of his short poems, having just ordered The Lammas Lands.
The Evening Entertainment is available from Eyewear Publishing.

Some coffee, a keyboard and my soul! My first true friends!