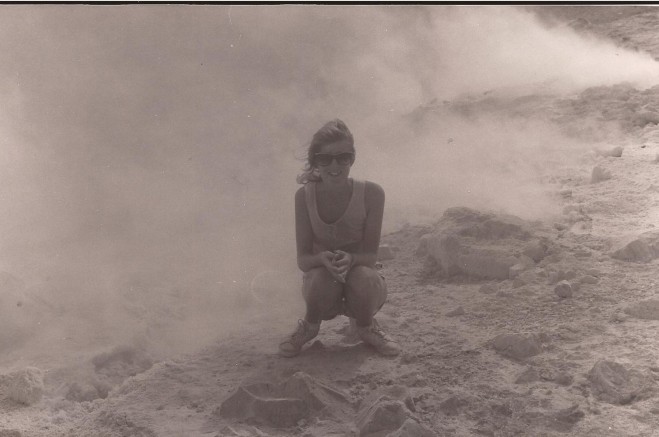 After the tragic events on New Zealand’s White Island, I hope this post, and the poem below, don’t come across as flippant.

I tend not to put much personal stuff on the blog – my rule is stick to the writing. However, in my early twenties I lived in Messina, Sicily, and then on a volcanic island off the coast of Milazzo, which is where the above photographs were taken. Legendary home of Hephaestos, it was a place where the sea boiled, where the rocks reared up like monsters, where there were pools of sulphurous mud you could bathe in to cure all sorts of ailments.  Wild and dramatic, yet oddly, I’ve never been able to capture much of it in my poetry. I also remember flying to Catania while Etna was erupting, looking out of the aeroplane’s window and seeing the lava running down the side of the volcano, then after a hair-raising landing, having to wade through ash (it really does fall like black snow) to get to the airport building. All this might seem adventurous and romantic, but the hard truth is that volcanos are incredibly unpredictable. Hearing about White Island made me feel very humble to have had such fabulous experiences and come away unscathed. My heart really does go out to the people who’s lives have been devastated by this terrible event.

And now, here’s the poem. I wrote it a few years ago, but it’s never been published, mainly I think, because I’ve never settled on a final version I was happy enough with. Even today I was tinkering with the order of the lines. I realise, though, that sometimes you have to let go of a poem, even if it’s not quite what you’d envisaged when you started writing it.

Black snow is falling in the Straits of Messina,
brittle as cinders, sooting the prow of the Georgione,
falling like burnt crumbs on the crow’s nests of tuna boats.

Ash is blocking the sun, drifting against doorways
in the suburbs of Pace and Contemplazione.
It settles on the windscreens of Fiat Unos, grits the runners
of the Hotel Sant’ Elia’s revolving door,
where businessmen drink grappa and meet women
who are not their wives.

On the Corso Cavour they’re pulling down blinds
and asking customers, politely, to remove their shoes.

Signor Ricciardi throws a shawl over his canaries
and on a thousand balconies women reel in their washing.

Behind the gates of Villa Gelsomino,
the Dobermans have given up barking.

The air tastes like stubbed out cigarettes.
In the hills above the city, the cacti are turning to stone.